One of the Agro-Know family traditions is the Christmas party, usually taking place at the AK offices during the last Friday before Christmas. It is an opportunity for colleagues to get in a festive mood and share their home-made sweet and savory specialties with the rest, while the AK admin dept. makes sure that there are enough drinks and snacks for everyone.  The participants are not limited to the AK team members but also external collaborators and close friends of AK are invited.

This year, things were a little bit different: The party would start at the AK office on Friday 20/12, early afternoon and would continue at Kimolia Art cafe, the cozy coffee place managed by Nikos Pal. We got several email and reminders from the Admin dept. for that, so we got a little curious. The party started at 13.00 with a presentation by Nikos Manouselis, including parts related to the story behind AK and the first steps (I am a sucker for such stories), the achievements so far, the vision and the next steps (skipping the boring financial stuff). I am not going into much details, but if all go well, we should expect really nice things in the next months/years by AK! 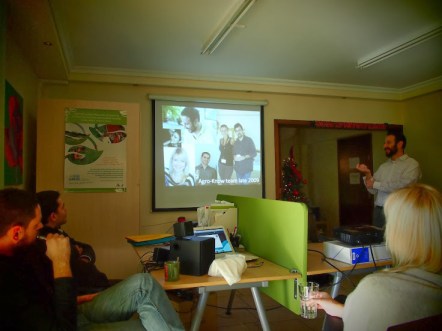 Next an interactive session during which everyone was invited to say some nice words (not especially difficult) for a specific other colleague (it was kind of a lottery, person was defined by drawing a paper from a pool of similar papers). This was nice, it went out of saying typical things about each other and at some point things got rather emotional… we’re a big family after all! This part also included some well-accepted corporate gifts – big thanks to AK for that!

Then it was time for the real party; everyone shut down their laptops and we headed to Kimolia Art Cafe. Nikos Pal. was already there expecting us. The well-know Red Room was booked for the AK team, along with additional tables in the next room (the AK team gets bigger and bigger). Everyone was relaxed so it was a nice opportunity for informal discussion (along with the usual boring discussions about projects etc!). Beers, home-made glühwein and cocktails were served, along with some really tasty snacks (you gotta try the club sandwich and chiabbata sandwiches). A lot of photos were taken but you have to live with these few ones for the time being until we process the rest – so please come back again! 😉 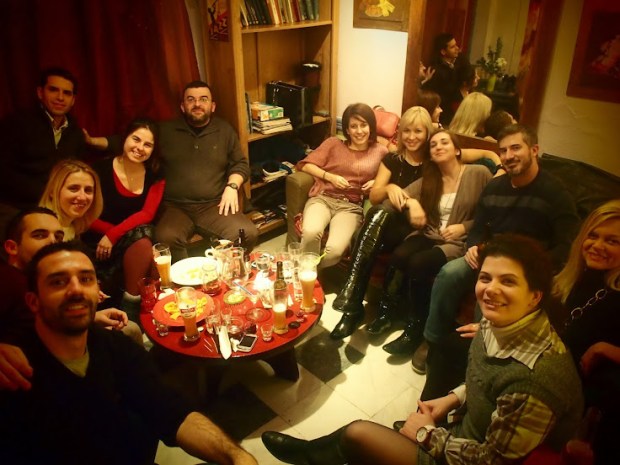 Next week will be strange, as some people will be on vacations so the office will be half-empty; this made the specific timing the most appropriate available. Next family event? The new year’s pie gathering, which is expected in early January 2013!

P.S. Stauros was already on holidays and was greatly missed (but frequently mentioned); on the other hand, we managed to have Mada participating in the first part of the event through Skype video call!