There are some things that we, the more experienced and old members of Agro-Know, take for granted. And that as new faces join the team and get involved in our everyday activities, we understand that we shouldn’t. One of those is the “totem” that is known as Organic.Edunet. I know what Organic.Edunet is, as well as what it was. I know how it was conceived. How it was designed. How it kicked off and developed in time. How it was launched, redesigned and re-deployed. But most of all, I know that Organic.Edunet was the opportunity that later would lead me to think about setting up a company specialised in agricultural knowledge management – yes, you which company I am referring to. Which means that I have a story to tell about this…

It has been a classic for several years (actually, until Organic.Lingua came and re-designed it)

If you visit www.organic-edunet.eu you can see what Organic.Edunet is today: a multilingual Web portal providing access to a wealth of information related to organic, agroecological and sustainable education for all educational levels. But Organic.Edunet (the portal) was  designed and developed through a European project: the eContentplus initiative called:
Organic.Edunet: A Multilingual Federation of Learning Repositories with Quality Content for the Awareness and Education of European Youth about Organic Agriculture and Agroecology (2008-2010).

The leaders of the team of the Informatics Lab of the Agricultural University of Athens – coordinating Bio@gro and then leading the content population of Organic.Edunet. Staring at the future?

It all started in 2006, while I was still doing my PhD at the Informatics Lab of the Agricultural University of Athens and working at an eContent project called Bio@gro. This was a project that was trying to create a rich information source with lots of information on organic agriculture, ranging from scientific publications to legislation and events. The content that was carefully selected, edited and published by several EU institutions for Bio@gro was of high quality and valuable. On the other hand, it was all indexed (with high quality metadata following a Dublin Core application profile that I was responsible to specify) in a single database system – and required lots of manual work over the same system in order to be extended and updated. At that time, initiatives where the members of the ARIADNE Foundation were participating (like MELT and ASPECT) have been working on the concept of technologies and standards of federated repositories: that is, interconnected databases that put in place ways to exchange information about their content and provide shared and common access to their material.

Life during the early stages of a PhD can be like kindergarten. Can you spot a young Babis in this photo? Babis Thanopoulos, not Babis Patrikakis (which was the typical joke for too many Babis-es in the same team 😉 )

As I was coming closer to the end of my PhD, I had to decide what I would like to do for a living. The option of continuing working in the Lab on some EU funded project and on topics related to repositories with agricultural content and online services to discover it, sounded very appealing. Hopefully, it would provide some funding that I could use to continue my scientific career. And it required some skills that I definitely had – acquiring and managing a large scale project.

Being a project manager sometimes only requires wearing a suit. And having nightmares about “the portal, the 2010 portal” as early as 2004 (yet another inside joke)

I therefore started thinking about a new project that could build on the idea of Bio@gro and adopt some of the new technogies in place. I have been working for quite some time (while being at ASK@ITI) on e-learning technologies, therefore I decided to design a new initiative for people carrying out educational activities on organic agriculture topics. I thought of expanding Bio@gro’s single source of information by connecting it with other relevant information sources. To examine if those used some database system to organise this info, or whether we needed to help them populate this info in a learning repository. And to discover the audiences and user groups that would actually find this useful in their every day work.

Step one: to find an appropriate funding opportunity and the right organisation to manage such a project. There was an open call for proposals from the EU eContentplus programme that seemed like a very relevant opportunity, looking for networks of educational content providers. But my University (that led Bio@gro) was undergoing some administrative turbulence due to student up-rests, which could create problems in the smooth management of such a project. I asked an old acquaintance for some help: Dr. Xenofon Tsilibaris from the Greek Research and Technology Network (GRNET), very experienced and reliable in managing EU projects for education and research stakeholders. Xenofon was interested to explore a new area and agreed to serve as the host for a new project (and of a small team to manage it). We had a Coordinator. 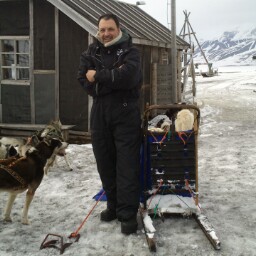 I couldn’t find a good photo of Xenofon from the Organic.Edunet times – what a shame!

Step two: find some institutions creating and managing digital organic agriculture content. My University was the core partner, but who else was doing similar things? I started searching online for relevant databases, networks, and projects. I randomly contacted prestigious organisations working on organic agriculture (like FiBL and ICROFS, that we later had the pleasure to work with). Eventually, a good line up of institutions that could bring a good mass of relevant educational content was assembled. We had our content providers network.

An excellent line-up, I would say. Smiling happily ever after the successful (excellent) final review meeting.

Step three was more straightforward but also difficult: involving a good technology partner that could help me set up the federated architecture of interconnected repositories that I had in mind. I directly contacted the prestigious group of Erik Duval from KULeuven, a core member of ARIADNE, whom I knew very well of but didn’t have an opportunity to work with. I was afraid that someone working at a Greek agricultural university and asking for back up at a federation of repositories would sound exotic to Erik and his group (this was 2006, agricultural data was not sexy at all then). But it seemed that I was extremely lucky: the KULeuven team was just completing a contract with one of the CGIAR centers on helping them set up a Moodle-based learning management system. We started looking into the architecture, thinking about solutions, discussing about partners. Buy at some point, the discussion did not move forward: the (busy and popular) team of Erik did not have the needed resources for such a big project at the periphery of their interests. I was back to point zero.

Would YOU trust those guys for your project?

Step three again, late summer of 2006 and with my time and options becoming less. I sent an email to the editor of the International Journal on Metadata and Semantics (IJMSO) where I had published the first journal paper from my PhD. I had met Miguel-Angel Sicilia when he was doing his PhD and visited ASK for a seminar, and he seemed like an easygoing guy. Now he was teaching at the Information Engineering Unit of the University of Alcala in Spain and running some EU projects on semantic learning technologies. Miguel-Angel (still Prof. Sicilia at that time for me 🙂 liked the idea very much. He also suggested getting on board a group from Sweden that worked with them at the EU project LUISA. This is how I was introduced to Dr. Ambjörn Naeve from the Royal Institute of Technology (KTH) in Stockholm and his young-at-that-time PhD students Matthias Palmer and Hannes Ebner. Our technical backbone (and the context for some long-lasting friendships) was ready. 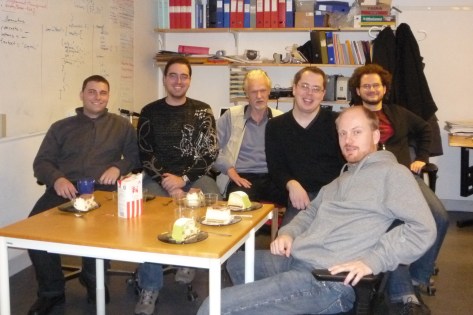 A Spanish-Swedish conspiracy. The people responsible for the technical backbone and front end of Organic.Edunet v.1… 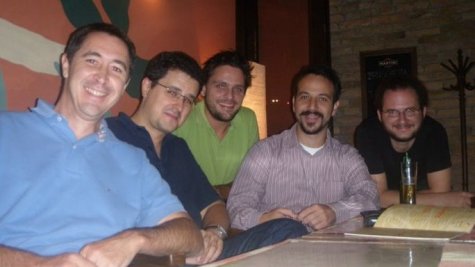 …and the Spanish-Greek-Austrian mafia that was responsible for drinking the beers.

The last part was the most difficult one. Yes we had a network of institutions and groups producing organic agriculture content. Yes we had a good technology approach, with a backbone of federated learning repositories and an online Web portal to discover material and access it [hint: there is a very old version of the portal that maybe you can discover at some forgotten Spanish server…]. But even if we built it, who would use it? [by the way: the Nordic guys, still do…] 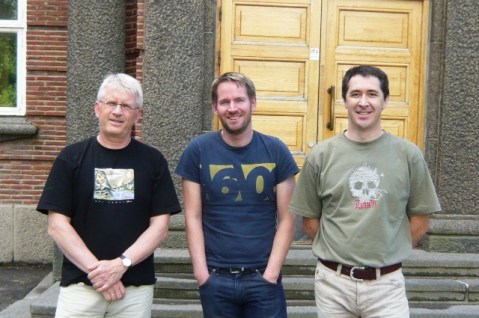 At the left, the great team from the Norwegian University of Life Sciences: Geir and Aage. At their right, some Spanish guy that I can’t remember his name of.

Step four was identifying relevant user audiences. I had some of them (like the Corvinus University of Budapest) as content providers that would also use the content in their educational activities. But I needed some diverse user organisations, preferably members in networks that could justify wide country coverage. I started looking again at networks working with organic agriculture and sustainable agriculture education. I sent some emails. I got a few, surprised responses. Two really were what I was looking for: Prof. Geir Lieblein from the Norwegian University of Life Sciences (and member of the AGROASIS Nordic Agroecology Network) and Dr. Ragnar Leming from the Estonian University of Life Sciences (and member of the Baltic Organic Agriculture Network).

Great Prof. Sideridis from Athens and Prof. Roman from Bucharest, at a great meeting at the rooftop of Athens.

Was this enough for the funding agency we targeted at? I didn’t think so. I needed some scenarios of use for this organic education portal that would go beyond the academic activities of universities. Again, I turned for help to an old acquaintance: Dr. Sofoklis Sotiriou had recently paid a visit to the lab where we dismissed about what we could do together. I called him again and asked him if he would find such a project of interest. He got excited: he always wanted to create a school garden at his school, and to design educational activities using digital resources. He brought some additional partners on board, like the Ministry of Education and Culture of Austria, the very active school of Schwechat, and Mihkel Pilv from the Miksike platform that supported a large network of teachers in Estonia and other Baltic countries. 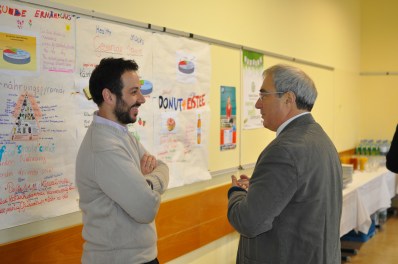 In an Austrian high-school classroom, trying to convince our Project Officer that we are doing a great job.

We were all set up. I spend my summer and early September writing the proposal, preparing the budget and all financial details, collecting administrative information from all partners, negotiating with some of the difficult ones, and putting everything together in a single grant application. By October 10th  of 2006, the application was ready and submitted. A couple of months later, an invitation email was received by Xenofon: the proposal called Organic.Edunet was positively evaluated by the EC experts and was selected for funding with a budget of 4,8 MEuros (and EU funding of 2,4MEuros) in total. The project would start on October 2007, and I had a job after finishing my PhD. A new, wonderful adventure was about to start – an adventure that created the environment to build the social network and expertise in which Agro-Know would be conceived and born. But this is another story that I will tell you some other time…

Launching a beautiful project and a wonderful experience of three years…

Agro-Know, biodiversity and the Bouchout Declaration

Organic.Lingua project ends with a green card, too!