It was about time to get started for the Value of the Month for April. Last time things were delayed a little bit but this time we had the flexibility to work on that early enough to allow everything to be ready on time. The value selected for April is No 4: “Respect everyone and be fair”, which according to the reference post is defined as:

We commit to act with respect and consideration towards our colleagues and clients. We have zero tolerance for inappropriate behavior, independently of the hierarchical level of the aggressor. When we act inappropriately, we apologize promptly – and if needed, publicly. We have the obligation to stand up to our values. We listen to and treat each voice with respect, objectively and non-hierarchically.

Let me express my personal opinion here: Respect is one of the core components for any kind of relation, including collaboration with colleagues; I could never be involved in any kind of collaboration characterized by lack of respect. When one is operating/working in a defined environment, he/she needs to feel respected and at the same time he needs to respect the rest; I am surely operating in this way. Personally I always respect friends and colleagues, and this is something that comes out naturally; I respect their work, their point of view and actions even when they are not according to my beliefs or standards. I also feel lucky enough to be respected in my work, both in AK as well as outside of it. Sometimes this might not be obvious and it might not come easy – sometimes you even have to fight about that but in the end you get the respect you deserve (if you deserve it at first of course 🙂 )

One important fact about respect is that it is earned – not taken for granted. No matter where everyone stands in a defined hierarchy, he needs to be respected but he should not request respect just because of his position. In this direction, in a small group like the AK team, we need to show our respect in various levels; from respecting the office rules, our colleagues and collaborators, their efforts and time, schedule etc. A bad case would be receiving a last-minute request from anyone, that needs to have something delivered in a short notice; this shows that your schedule is not respected, your time is not respected and in the end that you are taken for granted, being considered as the one to provide the solution in a short time without taking other aspects into consideration… 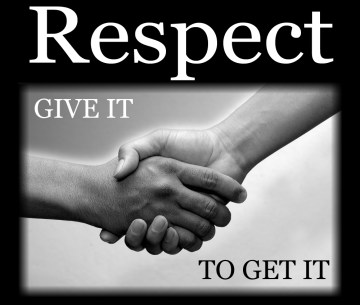 Being fair is also another crucial attribute for someone working in a team or a defined context. Equal opportunities need to be given to everyone, regardless their status and position while decisions need to be objective. I have to admit that this is not always easy, as we tend to have our own virtues and this might affect our judgement; however, in the end we need to do our best in order to be objective and fair in our work.  Being fair requires a clear judgement, giving equal opportunities and much more. To me it is obvious that everyone working in a team should be fair; if not, according to the “natural selection” process, he is eventually removed from the team…

Let’s see what the rest of the AK have to comment on that, starting with Elena who was the representative of the previous month’s Value:

Elena: I think that this value ” Respect everyone and be fair” is one of the most important values. I think that respect is the key for the good collaboration. So, in AK we want to have good collaborations and I see that in practice all of us feel respect for the others and we are ready to be apologized in case of wrong behaviour. I strongly believe what the following sign says.

Give respect, get respect (source: http://www.cumbria.gov.uk/yourcumbria/summer2008/respect.asp)

Mada, another member of the AK team, was kind enough to contribute her own understanding of the value of the month: To me “respect everyone and be fair” translates into “respect everyone’s views, knowledge and time”. Given time pressure and our desire to proudly deliver great results, we sometimes forget to listen, we forget that some’s views, knowledge or experience can be just as valuable as others’. We might sometimes think that we know best, that out time or tasks are the most important. This value is a reminder that fairness and respect should come before other duties.

It would be interesting to see what other AK team members have to say about the value of the month: In the comments to this post feel free to speak out your thoughts about the value of this month, express ideas, comments, give examples or even just upload a photo/picture that represents the way you understand the value.

As always, your contribution is not obligatory, but we would like to see 18 different comments (and even more, if possible)!

AK Value of the Month (October): Serve people, not solutions

AK Value of the Month (May): One happy family (or how to find the next Picasso)

AK Value of the month (July): Focus on value