The European Data Forum (EDF) 2014 took place between 19-20 of March 2014 and it was only one of the data-related events that would take place during the 6-month Greek presidency of the EU Council. According to the website of the event, “The European Data Forum (EDF) is an annual meeting place for industry, research, policy makers, and community initiatives to discuss the challenges and opportunities of data in Europe, especially in the light of recent developments such as Open Data, Linked Data and Big Data“. This is at the heart of what we are currently working on in AK; we are getting deeper and deeper in the open, linked and big data, always in the agricultural context. This means that there was no way that the AK team would not be represented at the event.

The event was collocated with the Europeana Cloud Plenary, which was attended by AK colleagues +Theodore Mathioudakis, +Effie Tsiflidou and +Andreas Drakos who are contributing to this effort. Andreas also helped with the Agro-Know booth that was setup at the EDF2014 and which was full of brochures of Organic.Lingua, as the sponsoring project of this activity, agINFRA and of course Agro-Know ones. 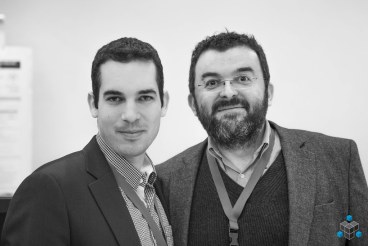 Even though I did not have the time to actually attend the speeches of the first day of the forum (unfortunately I could not attend the second day – the full programme is available here), I had a great time being there and meeting people who were interested in the AK products; at the same time, I had the time to take a look around and see what the other booths were about, finding interesting people, projects and products. I had the pleasure to meet Karel Charvat again (after the EFITA 2011 Conference), one of the most active persons that I know, actively involved in several initiatives. Among  the other participants, I got engaged in a discussion with Natalia Manola from Athina Research Center, a person actively involved in several data-related projects like DRIVER, OpenAIRE and OpenAIREPlus. Our first meeting was during the RDA 2nd Plenary Meeting in Washington D.C., last September. Last but not least, I had the pleasure to meet Dr. Christopher Brewster from the Aston Business School of the Aston University, UK – we had the opportunity to meet again during the next day at the AK office.

Overall it was a really interesting experience which provided us with the opportunity to expose our work to a related and wide audience (yes, the AK booth got busy at some points!) and to get to know interesting people working in similar topics and with whom we could establish collaborations in the near future. Andreas and Elena were there during the 2nd day of the event which was as useful as the first one.

Reporting on the EIP-AGRI Workshop on Data Sharing

Join our Webinar@AIMS: How much data is enough in Precision Agriculture?

From global challenges to local ones: linking communities around the world

Here is your call – Come and join forces!