The Organic.Lingua project officially ended on 28/2/2014, after 36 months of effort towards re-engineering the Organic.Edunet Web portal and enhancing it with multilingual functionalities, among several other outcomes. A consortium bringing together language technology experts, domain and ontology experts, content providers, developers etc. worked towards the development and integration of automatic metadata translation functionalities in the Organic.Edunet Web portal and other tools, a multilingual metadata authoring tool, a revised ontology and metadata application profile and a well-defined sustainability and exploitation plan, just to name a few of the project’s outcomes.

The project’s 3rd (and final) review meeting took place between 28-30/4/2014 at Luxembourg. In fact, the first two days were dedicated to the preparation of the presentation to be delivered during the actual Review Meeting on the 30th of April, the preparation of the scripts for the demos of the Organic.Lingua tools etc. In this direction, the whole Organic.Lingua project consortium had the opportunity to meet for the last time and work collaboratively in order to ensure that all achievements of the project would be properly presented and attributed during the review meeting.

These have been three days of intensive work, working long-hours and spending more time together with the project partners. The UAH team, coordinating the project (and not only) during these three years, was populated by Salvador Sanchez, Giannis Stoitsis, David Martin Moncunill, Meritxell Mallona Ponce and me while the Agro-Know team was proudly represented by Nikos Marianos.

Coffee break during the review meeting

The review meeting took place at the EuroForum building of the European Commission. All consortium members were present (at least one representative from each project partner) along with Aleksandra Wesolowska, the project officer of the project and the two reviewers: Dr. Phillip Cimiano from the University of Bielefeld, Germany and Dr. Piek Vossen from Vrije University, the Netherlands. As usual, the presentation included an overview of the outcomes per Work Package according to the project’s DoW and based on the feedback received during the previous review meeting as well as a demo during which project partners used the outcomes of the tool (e.g. the MoKi tool for the management of the ontology, the Organic.Edunet Web portal and its multilinguality features as well as the AgLR tool and the agriMoodle platform for the multilingual management of educational resources and courses respectively. During the meeting there were long discussions focusing on specific aspects of the project, such as the exploitation of the outcomes, the sustainability and of course the application of the approaches selected by the project in other contexts.

Even though it is way too early to extract precise outcomes from the meeting, the first impressions were positive; it was obvious that the consortium has taken into consideration all the feedback received during the previous review meeting, additional deliverables were provided when necessary and effort was focused on the aspects of the project which needed revisions etc. The reviewers had a deep knowledge in the technologies used by the project, which led to fruitful discussions during the meeting, and at the same time it was obvious that the exploitation of the outcomes and their sustainability through business models etc. were of special interest. However, the consolidated report which is expected within the next months , should provide more detailed and accurate feedback, as well as the final mark of the project.

Apart from that, it was nice for the consortium to have the opportunity to meet for the last time and have some time together; apart from the intensive work during these three days, we had the opportunity to see a little bit of the city of Luxembourg, try the local dishes and enjoy the Champions’ League matches of Spanish teams (Real and Atletico Madrid respectively, both of which did a great job btw!) while enjoying a glass of beer and snacks. After these three years of excellent collaboration between the consortium members, this was something that came out naturally. I really hope that we will have the opportunity to join our efforts in the near future, too! 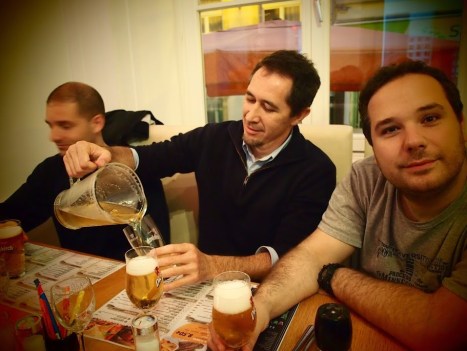 Getting ready for the 3rd (and final) agINFRA review meeting!

agriMoodle: The “green” version of Moodle

Agro-Know, biodiversity and the Bouchout Declaration